These are the top 6 source of information that can influence consumer’s purchasing decisions in Myanmar media landscape in 2019 (Reference: Deloitte’s Myanmar Consumer Survey 2019)

About Ten years ago, mobile SIM cards in Myanmar were quite expensive but in 2014 after Ooredoo and Telenor got its first service and started the free competition in Myanmar mobile market. The price of SIM cards is now around down to 1500 kyats or $1-1.50 USD. This circumstance led Myanmar people to have access to information faster and brands to reach their audiences in such a short time. The media landscape has changed since social media has quickly grown alongside with the traditional media. With the rapid growth of Social Media, the Traditional media businesses such as newspapers and radio are expanding their own media platforms into online media for maintaining customers and growing more potential audiences. Even though online media grow their popularity among capital cities, there are many people in rural areas who still consume news and entertainment by using offline media too.

The new media has changed Myanmar’s behaviours of entertaining and data consuming in many ways. Hence, understanding the new behaviour and interests could help us to understand our customers better and know how to communicate better too. In this article, we will cover the overview of the media landscape and the trends in Myanmar.

In Myanmar, offline media still has a huge influence over people even though the new media has bloomed. Especially, television, radio and printed media are still covering most of the people in Myanmar.

2 popular TV channels in Myanmar such as MRTV-4 and Skynet.

MRTV-4 is one main channel which presents daily news, entertainments, music, education, health, religion and many other programs. It has branching channels that cover different categories like Reader’s channel, Maharbawdi, 4EDU. Its sub-channels are Channel 7, Channel 9 and 5 Plus with targeted viewers aged over 35.

Skynet is first popular for their live streaming programs. Later, Skynet’s fame is getting bigger with time because of their sports channels and live programs. It has a lot of sub-channels like Skynet sport HD, Skynet movies, Skynet music and many others.

How about a TV show? Here are the top 5 favorite local television shows according to Myanmar Times record 2019:

For print media, Eleven and 7 days still have no less than 80K readers. Most of the readers of these two newspapers are aged over 50. However, print media industries are adapting their business according to the changing world by creating their websites. So, the young generation and internet users also can read news and entertainment online too. Examples of the print media that now open their website to worldwide 7 Day, Eleven, BBC Burmese, Irrawaddy Burmese, Mizzima Burmese.

Myanmar radio is one of the essential needs for a group of people in Myanmar taxi and bus drivers since they get to know the updates with news, traffic and music to entertain them. Moreover, radio is also moving to digital platforms and some of them are available on websites now. It is enjoyable for those who are away from home since they can also listen on websites wherever they are.
According to Media Landscapes website, during the junta years, programs transmitted abroad such as Voice of America, BBC and Radio Free Asia were popular and accessible.  A handful of commercial radio stations such as Shwe FM and Cherry FM operate alongside Myanmar Radio, state-run under the auspices of MRTV. The others include Irrawaddy FM, Padamyar FM which are becoming very popular in different areas of Myanmar.

Top 10 website in Myanmar (Base on our editor’s pick base on web traffic and relevance to Myanmar people, some websites have been taken out due to illegal copy write violation by reports from the Myanmar government)

In the Top10 website in Myanmar, we based on Top Sites in Myanmar by Alexa.com and analyzed it to our top 10 website in Myanmar. We choose only the reliable website and recheck the popularity with the local Myanmar people and other website to make sure that those are popular websites in Myanmar. Then, we narrowed it down to our top 10 online media in Myanmar. The sites in the Alexa top sites lists are ordered by their 1 month Alexa traffic rank. The rank is calculated using a combination of average daily visitors and pageviews over the past month.

Online media in Myanmar is growing rapidly and this is a big opportunity for many businesses that want to open their market in Myanmar. It is important to note that Myanmar is home to an array of ethnic groups. While the main language spoken is Burmese, there are other major ethic languages in use. To reach the mass audiences of Myanmar, we can still use Burmese language.

According to gs.statcounter.com, Myanmar mobile operating system market share 2019 stat shows that 88.53% of Myanmar people are using Android system smartphones and 11.35% are using iOS. Most of the Smartphone users, either android or iOS system users in Myanmar can now download their favourite apps easily by installing Google’s Play Store, APKPure.apk or iOS app store. So they can choose the apps depending on their interest.

According to Myanmar Times, there are some applications that are quite popular with most smartphone users, such as Facebook, Viber and WeChat which provide people to connect to social media and communication. Game apps that are popular among boys such as Mobile Legends and Clash of Clans. Besides that, photo editing apps are also very popular. For example, PicSay or Snapseed. The popular entertainment apps are TubeMate, YouTube or streaming apps such as Mahar Movies, Hulu and Cookies TV.

Here are Editors’ pick Top10 mobile app in Myanmar. We’ve queried and narrowed it down to our top 10 apps in Myanmar.

1. Top Celebrities according to socialbakers.com,

Over 85% of all internet traffic in Myanmar is from Facebook. For e-commerce, Facebook is one of the easiest platforms to set-up a page and start selling products. Therefore, many actual retail shops set up Facebook pages to reach out to buyers online, such as Endra Store, and Suu Baby & Mommy Store.


On Facebook, sellers increasingly use live videos on Facebook. (Example: Myanmar Snaker 42 posts a three-hour live video on the platform daily to sell second-hand shoes, with most of its videos attracting more than 10,000 viewers and 1000 comments.)

Many people in Myanmar shop on Facebook while online shopping websites and apps are growing. Shop.com.mm and RGO47 are one of the top marketplaces for online shopping. According to Colliers, Myanmar e-commerce is in the developing stage with US$6million in market value while Myanmar’s retail market is estimated to be worth $10 billion according to export.gov in Jan, 2020. It is still a good opportunity for e-commerce since around 30% of Myanmar’s population are living in cities and 70% of them are under 40 years old.

Alibaba entered the Myanmar market in 2018 with the acquisition of Daraz Group which operated Shop.com.mm. Their main strategy is to cut the commision percentage into zero and it attracts many retailers. In partnership with Yoma bank, it also offers retailers business loans of K100,000 to K10,000,000. In 2018, Shop.Com.mm began a local version of Alibaba’s global “11.11” , the online sale that offered discounts on 50,000 items in the largest online sales event in Myanmar and its shopping app was accessed by over 150,000 users. In the first hour of the promotion period, over 1500 orders were placed and most of the purchases were made by mobile phones, according to a representative of the company.

In 2019, with an interview Myanmar Times, Frans Maas, managing director of Shop.com.mm said “Throughout the last year, we’ve increased the online products from 50,000 unique products to now almost 500,000 products. The team set goals to grow 10 fold per year.”

“ Are your Brands already selling online?”

Although most online customers still prefer cash-on-delivery payment, the recent growth of KBZ Pay and Wave Money is encouraging for e-commerce start-ups. Wave Money has announced that it moved more than $1.3 billion in mobile remittances in 2018, and KBZ Pay said it had facilitated one million transactions through early April,2019.

Even though Myanmar has increased their consumption of online media in 2019, it still has a great combination of online and traditional media. Especially for E-commerce, new media has a big impact on how people do sales and advertising for reaching mass audiences due to its fast communication. For the shipping and payment, businesses might still need to use the agent and cash delivery system to fulfil the gap between online and offline to make customers feel the most convenient.

After Myanmar’s fast transition into the online media, many businesses are implementing online payment systems for customers to pay various bills through their applications which provide greater convenience. People in big cities like Yangon and Mandalay are starting to use online payment systems such as Wave Money, TrueMoney Myanmar, M-Pitesan (Ooredoo’s Mobile Money Service) and OK$.

Some Banks in Myanmar have provided services such as online payment and international credit, debit cards for a while. The Yangon City Development Committee (YCDC) teamed up with AYA Pay, KBZ Pay and CB Pay in 2019 to build a YCB payment system enabling people to pay various bills through their applications.They hope that these future payment system will make the entire process easier, and useful. Nevertheless, most areas in Myanmar are still running with cash and traditional banking systems.

If you want to be successful in doing marketing in Myanmar you can check out this article. https://blog.happioteam.com/marketing-in-myanmar-insights-from-online-agency-happio/

Our Happio team specialise in “Creative Digital & Activation Marketing” for the Myanmar market. We hope this article is useful to you, if you face any problems about marketing in Myanmar, feel free to contact us for consultation, we are open for a friendly phone call or email!

How should businesses respond to Myanmar Coup? Notes from Nikkei Asia Webinar 18 March 2021 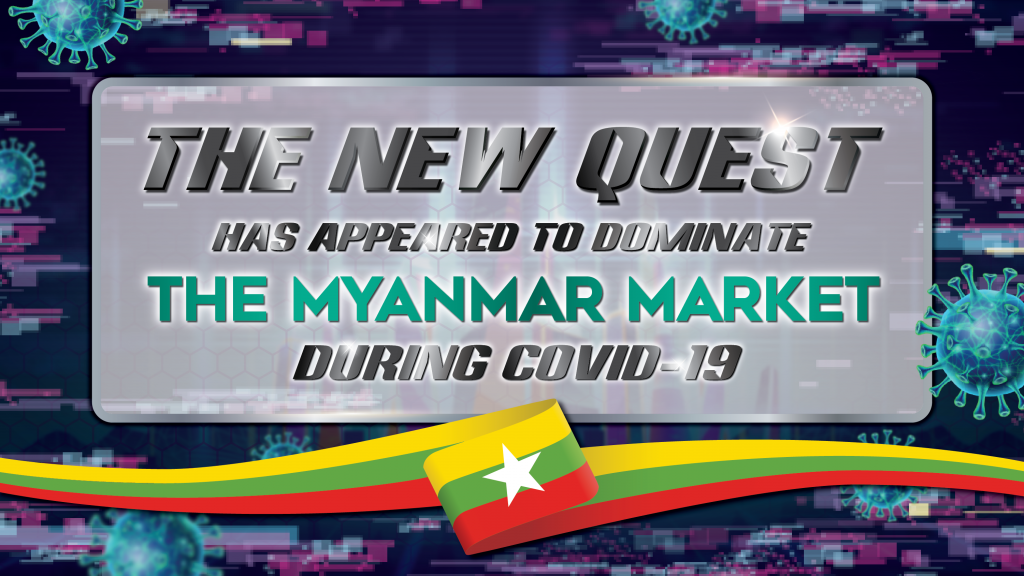 The Quest to dominate Myanmar market during Covid-19